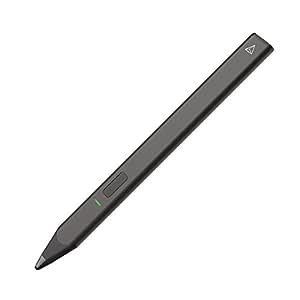 Your question may be answered by sellers, manufacturers, or customers who purchased this item, who are all part of the Amazon community.

Finally, a stylus made specifically for your smartphone. Snap attaches to your device for easy access on-the-go. Step-up your Snapchats and make your text messages more personal with the precision stylus for iPhone and Android phones.

Perfect for Your Smartphone

Specifically made for your mobile, this Adonit stylus has a 1.9mm tip that provides unparalleled precision for a natural drawing and writing experience. It can connect your device’s Bluetooth for easy photo capturing. With this stylus, you can step up your Snapchats by clicking stunning selfies with a press of a button.

The incredible thin design of Adonit Snap allows for easy portability and comfortable writing. Thanks to its small metal plate, you can attach this stylus to your smartphone magnetically for easy access while you are on the go. Furthermore, it offers up to 7 hours of battery life and can be fully charged in about one hour.

Appenundecitis
2.0 out of 5 starsNot really for note-takers
October 17, 2016 - Published on Amazon.com
Verified Purchase
I'm a stylus junky. I love handwriting notes but, since it's 2016, need those notes to be digital and synced to every device I own (and sometimes devices other people own). I prefer writing with an active stylus, of course, but have purchased a ton of capacitive stylus devices for iPad's. I'm currently using an iPad Air 2. I recently moved on from my Note 4 to a Nexus 6p, so I'm trying to make something work there as well.

Firstly, this stylus is built well enough. The top plastic insert, near the charging port, has popped out on one side a couple of times but that could just be mine. It's trivial to snap back into place. The stylus is very light but feels nice due to the aluminum body. The combination of carpenter pencil style and extreme light weight makes it feel weird to me, though... a little fragile, maybe. It's definitely nice when writing a ton, however, to help reduce hand fatigue.

As far as performance goes, it's not my favorite thing. If you are making quick annotations to a map or PDF, the stylus works fine. Big shapes, fast lines and marks, those happen without issue. There is a tiny amount of stroke lag but nothing to get upset about. There is an offset to the location of the stroke compared to where the tip is resting on the screen, and it sucks. More about that below.

Where the stylus fails me completely is writing. I've used this thing in several apps including Onenote, UPAD3, Notability, Noteshelf, and Adobe Acrobat. UPAD3 has the best ink I've found in any iPad app, and Notability has by far the best palm rejection, but this stylus had challenges that none of the mesh-tipped blobby stylus' had, even a bog-standard crappy-59-cent stylus.

Super unscientific diagnosis follows.
What challenged me was the Snap's offset: where the ink appeared related to the tips location on the screen. That the offset was there is bad enough but can be gotten used to. This offset, however, would move, and I think it was moving based on the location of the capacitive sensors. You can see this demonstrated best when drawing a diagonal line using one of these fine-tipped stylus': draw the line quickly and it comes out straight, but if you draw the line slowly it will create "steps" and the line looks terrible.
It seems like this is what's happening when writing with the Snap: even when writing fairly quickly, the location of the ink can shift slightly as you work your way through the capacitive sensor matrix or grid, and this makes the resulting writing look messy. It was impossible for me to get neat writing using the Snap. It also seemed like the distance at which the stylus was detected would vary; even if it was a small change it made writing feel very unnatural.

I had the best luck in UPAD, which has a pull-up "shade" that completely ignores touch screen input. Notability has palm rejection so good that with any mesh-tip stylus I can rest my hand on the screen all day without making stray marks, but not with the Snap. It was arrant mark city, which would then cause even more issues with my writing.

There's no way a capacitive stylus is going to compare to an active digitizer, but I had high hopes that the Snap would give me a more portable, fine-tipped stylus solution for situations when I'm not carrying my Surface Book around. Unfortunately I have too much difficulty using it for taking notes and will have to keep looking.
For basic annotations or more precise edits to photos, though, this stylus works well.
Read more
71 people found this helpful.

Vlad Popovic
5.0 out of 5 starsCLEARLY YOU WON'T REGRET READING THIS.
December 18, 2016 - Published on Amazon.com
Verified Purchase
9.7 out of 10
If you're a stylus person whether or not an artist, this is one of the best ergonomics brought to market as of yet.
It's compact size, it's second life as a selfie shutter switch (via Bluetooth), and overall ability to handle both thick tempered glass screen protector's along with thin film type screen protector's make this stylus one of the top three offerings across the entire stylus currently available - especially given its price based on overall quality, its one of the best three capacitative stylus' on the market .... period.
Also battery life is very good to excellent along with charge time whichis fairly incredible in terms of how short a full charge takes.
Adonis does it again!
The only detractor I was able to manufacture, relates to the magnet; it's great for attaching it both to your phone along with any notebook or similar piece of portable technology; the problem I faced is that, for example, if in your car it drops between the seats and you don't recall the sheet power of the magnet inside this stylus, you may never find it again. A number of times I have found it stuck to the passenger or driver seat's steel substructure depending on which crack I accidentally dropped it into. Yet I don't see a need to eliminate the magnet, but rather a hole for a lanyard or wrist loop preferably included, but either way regardless. Nitpicking, further, if the lanyard or wrist loop were of a bright color it would also act as a location flag especially if you've seen some of the creative places this strong magnet has ended up attaching this excellent stylus to.
Until such time that a lanyard or wrist attachment is available, I would strongly recommend to not purchase the color black but rather choose white or gold has me very quickly save you between 35 and $40. Black hides on painted steel Incredibly well.
All of this aside, this is still clearly one of the best stylus' available, and one of my personal favorites.
Thanks,
Jon
Read more
8 people found this helpful.

A You
5.0 out of 5 stars... before the Pencil came out and I was always pleased. They weren't as good as the Pencil but ...
October 14, 2016 - Published on Amazon.com
Verified Purchase
I have used other Adonit stylus for the iPad before the Pencil came out and I was always pleased. They weren't as good as the Pencil but close. I always wanted a stylus for the iPhone so as soon as I saw this I took the plunge. Overall I am very happy. It works as advertised and connected to my iPhone 6S without a problem. There is a little lag with Preocreate Pocket so I'm assuming an update to the app will fix it. Sketchbook and Concepts worked just fine. Overall navigation worked great too. The button on the stylus that allows you to take a picture without pressing anything on the iPhone is very cool. I noticed that when not in the camera app, and you press the button, it decreases the volume, though it would not increase it.
I almost gave this product 4 stars because of the adhesive thin magnet that is suppose to attach the stylus to your iPhone. Then I reconsidered my rating because the magnet does not have anything to do with the performance of the stylus. Yet, the only way the magnet really works is on the bare iPhone, meaning no case. I tried attaching to it to the outside of my case but the adhesive wasn't strong enough and came off. I need to protect my iPhone so I guess I'll have to carry the stylus around separately. I just hope I don't lose it. It would be great if Adonit (or someone) came out with a case that had a slot for the stylus...hint hint :-)
Bottom line: Great stylus for iPhone
Read more
27 people found this helpful.
Go to Amazon.com to see all 100 reviews 3.2 out of 5 stars
Discover the best of shopping and entertainment with Amazon Prime
Prime members enjoy FREE Delivery on millions of eligible domestic and international items, in addition to exclusive access to movies, TV shows, and more.
> Get started
Back to top
Get to Know Us
Shop with Us
Make Money with Us
Let Us Help You
EnglishChoose a language for shopping. United Arab EmiratesChoose a country/region for shopping.
© 1996-2020, Amazon.com, Inc. or its affiliates