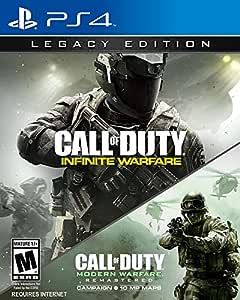 Item is in your Cart

Fulfillment by Amazon (FBA) is a service we offer sellers that lets them store their products in Amazon's fulfillment centers, and we directly pack, ship, and provide customer service for these products. Something we hope you'll especially enjoy: FBA items qualify for FREE Shipping and Amazon Prime.

If you're a seller, Fulfillment by Amazon can help you grow your business. Learn more about the program.

What other items do customers buy after viewing this item?

One of the most critically-acclaimed games in history, Call of Duty: Modern Warfare is back, remastered in true high-definition featuring improved textures, physically based rendering, high-dynamic range lighting and much more to bring a new generation experience to fans. Relive the iconic campaign as you are transported around the globe with Capt. Price, Gaz and Soap across fan favorite missions, including 'All Ghillied Up', 'Mile High Club', and 'Crew Expendable'. And team up with your friends with 10 of the iconic multiplayer maps from the online multiplayer mode that redefined Call of Duty introducing killstreaks, XP, Prestige and more in customizable, classic multiplayer modes.

Page 1 of 1 Start overPage 1 of 1
This shopping feature will continue to load items when the Enter key is pressed. In order to navigate out of this carousel, please use your heading shortcut key to navigate to the next or previous heading.
Back
Next
Customer Questions & Answers
See questions and answers

Hermon
1.0 out of 5 stars EXPIRED KEY GIVEN !! STAY AWAY
October 29, 2019
Hardware Platform: PlayStation 4Verified Purchase
I purchased COD Legacy edition on 4th of Oct 2019. It came with an expired Key which u need to play modern warfare ..expiry was 30th September 2019!! Such a waste of money !! They sold me expired keys ..old stock for sure !! So disappointed with Amazon on this purchase !!
Read more
8 people found this helpful
Helpful
Comment Report abuse

GiGi_777
1.0 out of 5 stars Modern Warfare expired code
October 21, 2019
Hardware Platform: PlayStation 4Verified Purchase
The Legacy Edition comes with a code in order to download the Modern Warfare Edition. The code inside the box has an expiration date on September 30th 2019. It is therefore impossible to download and play COD modern warfare. This edition should be removed from the store.
Read more
6 people found this helpful
Helpful
Comment Report abuse

abdulrahim
1.0 out of 5 stars The MWR code I got was expired
November 9, 2019
Hardware Platform: PlayStation 4Verified Purchase
The game is fine but the MWR Code inside the game is already expired before you buy it. Idk if it’s only my copy but this is not ethical the sell someone a product that has expired. Furthermore why does the code have an expiration date to begin with??
Read more
6 people found this helpful
Helpful
Comment Report abuse

Saad M.
2.0 out of 5 stars Please dont buy
November 13, 2019
Hardware Platform: PlayStation 4Verified Purchase
I bought the product like a week ago and the code that i got for downloading modern warfare remastered had been expired on the 30th of September 2019 and i was highly disappointed
Read more
5 people found this helpful
Helpful
Comment Report abuse

D. Robertson
1.0 out of 5 stars Don't bother, the MWRM code is expired
December 1, 2019
Hardware Platform: PlayStation 4Verified Purchase
This is getting returned - you cannot sell a game containing a code that expired on the 30th September 2019 and expect to get away with it.
Read more
5 people found this helpful
Helpful
Comment Report abuse

AJ
1.0 out of 5 stars Code did not work
August 2, 2019
Hardware Platform: PlayStation 4Verified Purchase
Code for modern warfare was not valid. Seemed like it was a used game.
Read more
6 people found this helpful
Helpful
Comment Report abuse

Chris P
1.0 out of 5 stars Modern Warfare Remastered Code does not work
December 14, 2019
Hardware Platform: PlayStation 4Verified Purchase
This appears to be the original copy of the game, from 2016. Modern Warfare remastered is provided as a code in the product, but it appears expired. Nowhere on the product listing is this made clear. Very anti-customer and a clear misrepresentation of what you are getting when you buy the product.
Read more
One person found this helpful
Helpful
Comment Report abuse
There are 33 customer reviews and 53 customer ratings.
See all 33 customer reviews
Write a customer review
Discover the best of shopping and entertainment with Amazon Prime
Prime members enjoy FREE Delivery on millions of eligible domestic and international items, in addition to exclusive access to movies, TV shows, and more.
> Get started
Back to top
Get to Know Us
Shop with Us
Make Money with Us
Let Us Help You
EnglishChoose a language for shopping. United Arab EmiratesChoose a country/region for shopping.
© 1996-2020, Amazon.com, Inc. or its affiliates