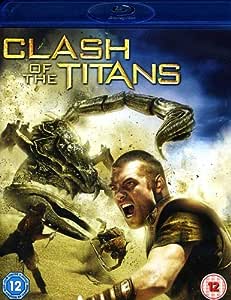 This item at this price, sold by Amazon.com, is currently reserved exclusively for Prime members.

Fulfillment by Amazon (FBA) is a service we offer sellers that lets them store their products in Amazon's fulfillment centers, and we directly pack, ship, and provide customer service for these products. Something we hope you'll especially enjoy: FBA items qualify for FREE Shipping and Amazon Prime.

If you're a seller, Fulfillment by Amazon can help you grow your business. Learn more about the program.

Your question may be answered by sellers, manufacturers, or customers who purchased this item, who are all part of the Amazon community.

Jay OhnieB
2.0 out of 5 starsVery disappointing.
July 6, 2018 - Published on Amazon.com
Verified Purchase
I can’t believe they made two of these! I don’t know where they got the ‘myths’ they were writing about but it wasn’t Ancient Greece.
Greek mythology is very exciting, action-packed, and suspenseful all on its own. I have no idea why they chose to monkey with it.
Perhaps they planned a third one set in Troy but Troy was in Kansas and ruled by orcs.
Read more
7 people found this helpful.

Swampy
5.0 out of 5 starsA big fan of the original
February 10, 2014 - Published on Amazon.com
Verified Purchase
This review is based purely on the fact that this is a remake of the original movie, which I love! This movie is not an accurate representation of the original tale. I'm okay with that. I feel that in this day and age it is very rare for a movie to be exactly like its book counterpart, or in this case myth. With that said, here are some things I did not particularly like about this remake. First off I don't like how the concept of life on Earth being a game to the Gods was downplayed. It seemed like they were a bit more human themselves, and not so much "arrogant gods" who don't really think about consequences. They have the big "game board" and even have the pieces for each character, but you never really see them manipulating anyone like a game. Next off is Perseus' hair. A buzz-cut? really? Lastly I did not really appreciate the Bobo cameo, I felt it mocked the original movie more than paying tribute. Those are my biggest complaints, barely complaints really. This movie is GORGEOUS, fun, and full of great fantasy situations. Medusa looked fantastic (although not frightening), and the Kraken was simply amazing. As a fan of anything fantasy, Sci Fi or horror related I highly recommend this well done Remake.
Read more
6 people found this helpful.

Helen Kelley
3.0 out of 5 starsSo So!
November 8, 2013 - Published on Amazon.com
Verified Purchase
I went to see Clash when it first hit the theaters. I remember sitting there more or less bored, and wondering about a real plot. For the most part I was not entertained by this movie. Nice special effects, but then there is no real story. Interesting that a Norweigan fable character is included. I was surprised that Liam Nesson & Ralph Fiennes would want to be a part of this production. I remember that Liam Nesson lost his wife in 2009, so I felt that maybe this had something to do with his seeming disconnection with the part.

What was the real reason for Perseus taking on the quest? He did not know the princess? He had no real connection with the people of Argos? To think he could get some real revenge over Hades who sweeps into the palace in a black cloud with fire, and all the soldiers are sucked into the black storm & fire onto their death. Hades touches the queen's face and she turns into an old women and dies on the floor next to the king . Hades demands that the princess be sacrificed to the Kraken within 10 days, at which point (after Hades reveals who Perseus really is) Perseus and a group of soldiers take off on the quest to cut off Medusa's head so that the Kraken can be turned to stone. Yada, yada, yada, yada.

I decided to purchase the DVD to give it another try. Now I have both Clash & Wrath. Even watching both of these movies together, I find I am still wrestling with plausibility issues.
Read more
One person found this helpful.

Michele Lyons
3.0 out of 5 starsAmazing special effects, but not much else
September 24, 2010 - Published on Amazon.com
Verified Purchase
Like many others, I was a fan of the earlier version of Clash of the Titans. This modern version is plagued by all the same problems that seem to be a part of today's movie making: the makers let the special effects dominate the movie, and dismiss everything else. I loved this movie for the special effects, and it is worth watching, and even owning, just for that alone. The characters, the monsters, the battle scenes, the gods, etc. were all worth the price of admission. My favorite part is that the winged stallion Pegasus is jet black, and has a herd of pure white winged mares. But I would have liked a little more story. Another of the problems this movie has is its' near complete lack of color. Everything is in muted shades of bronze, brown, black, gray and cream. It totally amazes me that today, with fantastic fabrics in every color of the rainbow easily available, no one in Hollywood seems to think to use them. For all the colors this movie has, it might just as well have been filmed in black and white. Not to mention that many of the scenes, like the confrontation with Medusa, are so very dark that it is hard to make out the action. Directors today seem bogged down by "historical accuracy" and "true to life". But this story is not a history lesson, it is a fable. The original Clash of the Titans remembered that it was a fairy tale, used beautiful fabric and bright colors, had characters in it that looked like they bathed, and had bright backgrounds filled with light that let the audience see what was going on. With the modern version, I felt like I should run it through a computer, and add color and light to it. As it is, the heros are brown, the monsters are brown and the backgrounds are brown.

Moreover, the makers of this movie did nothing to tell even a bare bones story. There is no reason in this movie for Perseus to rescue Andromeda, or to risk his life for the city---he is a stranger to the princess, and the people of the city have not exactly been friendly to him. He is imprisoned, tortured and then forced into taking on the quest. He should have taken off the first chance he got. The idea that he has some vague idea of getting back at the gods is not sufficient.

This movie is worth watching, with fantastic special effects, but I would have loved to see how much better it could have been with bright colors, more light and a better story.
Read more
6 people found this helpful.
Go to Amazon.com to see all 922 reviews 4.2 out of 5 stars
Discover the best of shopping and entertainment with Amazon Prime
Prime members enjoy FREE Delivery on millions of eligible domestic and international items, in addition to exclusive access to movies, TV shows, and more.
> Get started
Back to top
Get to Know Us
Shop with Us
Make Money with Us
Let Us Help You
EnglishChoose a language for shopping. United Arab EmiratesChoose a country/region for shopping.
© 1996-2020, Amazon.com, Inc. or its affiliates