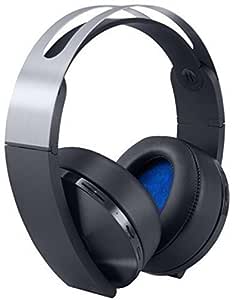 What other items do customers buy after viewing this item?

Sony PlayStation 4 wireless headset has a durable, soft, and foldable design. This Sony gaming headset is compatible with PS4, mobiles, PCs, etc. Sony needs no introduction when it comes to revered sound quality, and the same superior sound quality can be heard on the Sony PlayStation 4 Platinum Wireless Headset. They are integrated with large drivers and premium surround sound technology that makes every action on the screen come alive with crystal clear audio plus thundering bass and an immersive, enveloping feel. The 3D audio mode goes a step further than the surround effects and makes you a part of the ongoing gaming action with its spectacular sounds coming from all directions including the front and behind. You can play longer than ever in sheer comfort with the headset's contouring, well-cushioned design coupled with a long battery life.

--Sound Quality:
Astro A50s have better sound quality. Not that the PS4 Platinum is bad, there's not a massive difference in quality, but if you are an audiophile you will notice a difference.

PS4 Platinum gives off a more exaggerated sound while the A50 sounds more natural. A50 has a better range in terms of audio quality (does well in low, mids and highs) as the Sony Platinum is good at mid to highs.

PS4 Platinum has a better spacial awareness or where enemies and sound is coming from in game (especially with 3D audio*). So if you are a hardcore gamer and want a more functional headset (in terms of gameplay) compared to one that sounds better, the PS4 platinum is a better choice.

*3D audio is only present in a few games at the moment and it spacial awareness is amazing. The spacial awareness still works on titles that do not support 3D audio, but not as pronounced as you cannot hear what's above or below you. Both Astro A50 and PS4 Platinum you are able to hear what's going on around you (not top/bottom with non-3d audio compatible games for Sony Plat) but Sony Platinum does a better job. Hope this headset catches on as i like to see more games with 3D audio.

--Build:
PS4 Platinum has a weaker build as I say most of the cost went into the technology.

The PS4 platinum is able to fold up if you want to travel with it or put it in a compact storage space.

In general the Astro A50s has a more sturdy build, but not as portable.

Both are very comfortable to wear over extended periods of time

Astro A50 buttons are easier to press and is more user friendly especially with the analog scroll volume wheel . PS4 Platinum has most of the functions along the back side of the headset and most buttons have similar tactile feedback so it's hard to get a grasp at it at times.

--Compatibility:
Right off the bat, if you want surround sound on the PS4 Platinum headset, it ONLY works on the PS4/PS4 Pro. If you want to use it on other devices it will only output stereo.

Both does not have bluetooth as they have their own receiver.

With the Astro A50 there's more wiring as you have to connect it the PS4 via wired USB and an optical cable. PS4 Platinum just used a Wireless USB dongle, so you just plug and play instead of fiddling around with wires.

If you want to use your headset to connect to a device with a 3mm jack, the PS4Platinum as a dedicated 3mm headphone port on the headset itself, but know that it only outputs stereo. Astro A50 on the other hand, have no wired 3mm option to the headset itself as you have to connect via the mix amp which needs to connect via USB power source, and 3mm audio cable coming out of the mix amp. Sony Platinum is more portable in this sense as if you want to bring the Astro A50 out in public you have to connect the mix amp via power bank and deal with two separate wires

Both have custom software, but the PS4 Platinum is easily accessible via PS4 app if you play on the PS4. For the Astro A50 you have to set it up via PC then download the info to the headset before you can use a new custom preset.

The PS4 Platinum headset app has custom setting for specific games that the developers put in that take advantage of the 3D audio. As of this review only 4 titles are available: Uncharted 4, Watch Dogs 2, Last Guardian, and MLB The Show 16

--Mic Quality:
Both are about the same. Astro A50 is slightly better, but if you don't listen to them side-by-side and try to focus on the audio they're generally the same. You can hear each other person well on the other end and vice versa. Astro A50s you have to pull down the mic so it's in front of your face, but that's generally not an issue. It's easier to mute chat volume with Astro A50 as you just have to lift up the boom mic as i find that much faster than reaching back and hitting a dedicated mute button on the Sony Platinum

--Battery Life:
PS4 platinum has 2-3 times more battery than the Astro A50s depending on volume and chat settings

--Summary:
For the price I'd say the PS4 Platinum is a good value if you're on a budget (only if you play it on the PS4 as the surround sound doesn't work on any other devices) as the Astro A50 you'll be paying $100+ more depending on where you purchase it. If you can shell out more I'd go for the A50 if you want a more immersive audio experience

Astro A50 has better audio quality, but PS4 Platinum out preforms it in spacial awareness.

Astro A50 has a better build, but if you don't' toss your headset in the corner of the room each time, both should last a long time.

Battery life on the PS4 Platinum is way better.

Personally I'm going to use both, now I can use the A50 as a PC only headset since before I have to keep moving the Mix Amp when I want to change console/systems.

If you have any questions or find this review helpful leave a comment. Hope this helps you in your purchasing decision. Thank you.

Jaybird
5.0 out of 5 starsPerfect for 2 PS4 Pros and about to buy a 3rd
August 26, 2018 - Published on Amazon.com
Edition: PlatinumVerified Purchase
So I can tell you I have read probably over 500 reviews on different headsets and it seems like everyone has a certain flaw when it comes to connecting to the PS4. Well, I purchased one of these a long time ago and loved it so I have a second one now. For people who don’t read instructions I would say to skim through quickly with these. If you buy these and leave it on normal presets I would say they are just average. Preset 1 I think is normal sound and 2 has more bass. After I loaded the 2 presets god of war and I use the uncharted preset for my shooting games. Does very well with sound. You have chat vs game volume rocker. My friends have said they can hear me perfectly. If you crank these they are super loud. Too much for me. They have the feature where you can hear yourself but I wasn’t a fan of it so I turned it off. Some people might like that. Love when I turn the virtual surround sound on. Works great and for games like uncharted 4 where they have 3d sound it’s amazing.
So far I have two of these and they are great. Only issue I have is if you have two going on the same network it sometimes gives an echo but rarely and it seems to be better now. Haven’t heard it in a long time. There are a lot of presets you can put on it. They don’t update that to often but every now and then one comes out. Like the new god of war sound profile. I would recommend buying these over the golds. I did have the golds and the sound isn’t as good. It only has one preset. And it would cut out from time to time. I would definitely recommend these. I actually have to buy a throes PS4 since online gaming pretty much is only one person at a time on it and we have three gamers in the family. So I will be shopping another set. Hope this review helped.
Read more
53 people found this helpful.

BatmanYZFr1
4.0 out of 5 starsBetter than Gold
February 17, 2017 - Published on Amazon.com
Edition: PlatinumVerified Purchase
My daughter has the Gold set while I just got the Platinum. I was able to switch back and forth to compare. The platinum is a great improvement. Clear and crisp. Good rich bass. Noise cancelling and surround sound is also great. I also find it more comfortable than the gold.(even 8/12" hat size head) I've worn it for 4 hours at a time and on one charge.
I am happy with it because it is quite noticeably a better product. It won't compete with BOSE or the like, but for under $200, they are pretty nice.
Read more
198 people found this helpful.

Logan Carpenter
4.0 out of 5 starsBetter than the Gold headset.
May 20, 2018 - Published on Amazon.com
Edition: PlatinumVerified Purchase
They look awesome, I love the in-ear mic, and the sound quality is definitely better than the gold headset. The biggest item on my list coming from the gold headset is durability. Those stupid little plastic hinges broke even with careful use on TWO gold headsets. I figured it'd be cheaper in the long run to spend the money on the nicer headset. The durability is remarkable, these are much better built. HOWEVER, they are also remarkably uncomfortable. Whoever designed the headband tried it on for 30 seconds and decided they deserve a raise. It would be more comfortable to cut the headband off and rig up some bailing wire. If I were planning to buy these right now, I'd go into it with a plan for either padding or replacing the headband. I ended up buying the Steelseries Arctis 7 (great headband, go figure) after a few months and gifted these to my girlfriend who doesn't use a headset as often as I do. Also, my Arctis 7 headset has MUCH better connectivity, it'll work from anywhere in my apartment vs this headset which would cut occasionally at any distance and lose signal completely at about 15ft.
Read more
32 people found this helpful.
Go to Amazon.com to see all 1,265 reviews 3.8 out of 5 stars
Discover the best of shopping and entertainment with Amazon Prime
Prime members enjoy FREE Delivery on millions of eligible domestic and international items, in addition to exclusive access to movies, TV shows, and more.
> Get started
Back to top
Get to Know Us
Shop with Us
Make Money with Us
Let Us Help You
EnglishChoose a language for shopping. United Arab EmiratesChoose a country/region for shopping.
© 1996-2020, Amazon.com, Inc. or its affiliates